The CTARC committee has received several requests for presentations intended to assist new radio hams to get to grips with aspects of our hobby.


As we have been unable to arrange a New Hams Presentation speaker for our September meeting, our next New Hams session will take place on Saturday 28th October beginning at 13h00, an hour ahead of the regularly scheduled main meeting, at the CTARC clubhouse.

This session, conducted by Noel / ZS1FW, will be on the subject of  Ham Radio Terminology.
Posted by Cape Town Amateur Radio Centre at 12:02
Email ThisBlogThis!Share to TwitterShare to FacebookShare to Pinterest
Labels: 2017, clubhouse, meeting, new hams, october, zs1fw

Following a committee meeting at the CTARC clubhouse yesterday evening, once again the call is going out for nominations for the Len Wells Ham Spirit Trophy. This time around it will be the 50th Anniversary of the Trophy, and Dennis / ZS1AU would like to make something of an occasion of it.

The trophy is awarded to Radio Amateurs who are making a real difference to our hobby in a positive way and who by doing so display true Ham Spirit. While the award is handed out by Dennis at the CTARC's end of year meeting at the clubhouse on the fourth Saturday in November, nominees need not necessarily be members of the CTARC. This year, the CTARC's end of year meeting will be held on Saturday, 25th November 2017.

Nominations should be submitted by e-mail to Dennis / ZS1AU, together with a motivation for the nomination, to zs1au@telkomsa.net. Such nominations must please be submitted before the end of October 2017 as Dennis has to make his decision and the winners name has to be engraved.

Last year, the Trophy was awarded to Ettienne / ZS1AX, shown here below with Dennis. 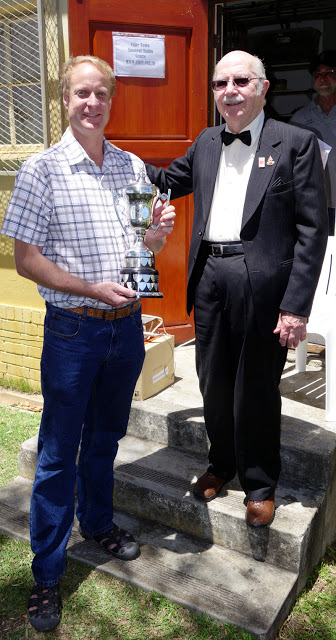 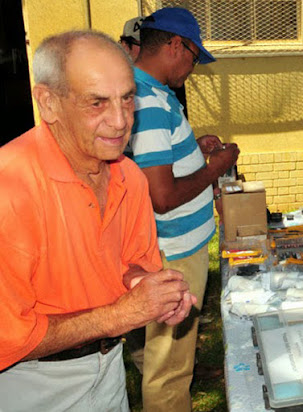 It is will deep regret we have to inform you of the passing of CTARC club member, Hugo Friedmann, ZS1HSF.

We understand that Hugo passed away in mid-September 2017.

His sister Dene has informed us that the funeral will be on Tuesday 26 September at the Corpus Christi Church in Castletown Road in Wynberg, at 10h00.

She said Hugo loved his Radio Club and she would be very pleased if some of his friends there could attend.

On behalf of the Chairman, Committee and the entire CTARC we offer our sincere condolences to Hugo’s family.
Posted by Cape Town Amateur Radio Centre at 12:00
Email ThisBlogThis!Share to TwitterShare to FacebookShare to Pinterest
Labels: 2017, CTARC, in memorium, september, silent key, zs1hsf

Here are the photos of the September 2017 "Show and Tell" meeting of the CTARC:
The report-back on the meeting is [here]. The first page of photos is [here].

Here are the photos of the September 2017 "Show and Tell" meeting of the CTARC:
The report-back on the meeting is [here]. The second page of photos is [here]. 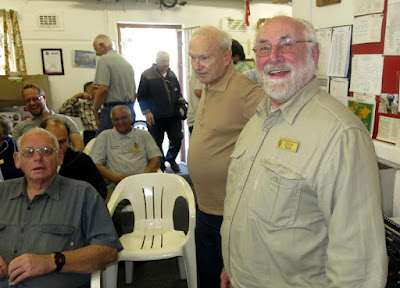 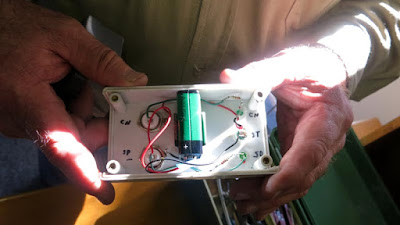 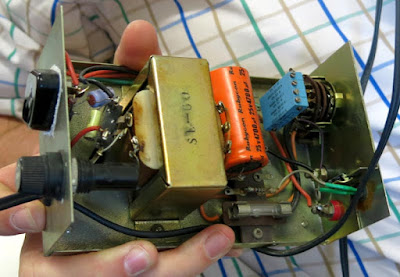 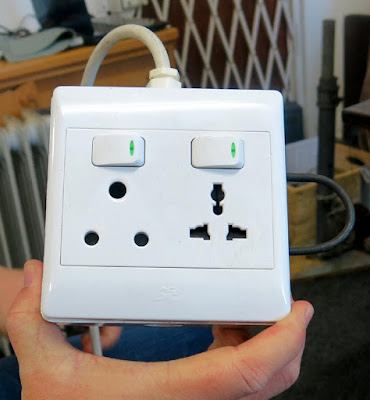 On Saturday, 23 September 2017, the Cape Town Amateur Radio Centre held its monthly meeting at the clubhouse in Rondebosch. Starting promptly at 14h00, our chairman, Rob / ZS1SA welcomed a gratifyingly full clubhouse to the meeting.

We had to start with the sad news of a silent key. OM Geoffrey Tyler / ZR1GFT, who passed away recently in hospital after a brief illness. A moments silence was held in memory of Geoff. We offer  our condolences to his widow, Val and her family. Geoff will be missed.

Rod then had the far happier task of handing over a club award to Richard / ZS1RIC, who won the Golden Wellie (for consistent club attendance through thick and thin). Richard had been unavailable at the July AGM when his award was announced.

Rob then gave a brief report-back on our recent Committee Meeting of last Monday, most of which had to do with progress in the repair and refurbishment of our club antennae. It will take several more work parties to get the club on air on HF. The intention is to get the A3S beam antenna up and running as soon as possible, to take advantage of various contests that are in the pipeline.

Rob also welcomed visitor Paulo / IU2EFB, visiting Cape Town from Italia. Paulo is in Sea Point at the moment and we hope to work him on air.

Then it was time for the main part of the meeting – Show and Tell.

Rob kicked off by showing us a very handy little cable tester that he built from a circuit in QST. It enables you to test coaxial cables for intermittents, shorts and open circuit, and is far handier than an ohmmeter. The circuit is very simple indeed, using just two LED's and a couple of SO-239 coaxial sockets. Rob also showed us his “chicken stick” -  a nifty device for safely discharging the large capacitors on a valve linear amplifier.

Rob was followed by Mike / ZS1FP. Mike showed us a very handy little power supply unit that he adapted from a broken one that he had found. Using a regulator and variable trimpots, he was able to convert it into one that has four switchable voltage outputs.

Mike also showed us a three-pin mains tester, using three neon tube indicators (two green and one red) that can show instantly whether a mains socket is correctly wired or not.

If that weren’t enough, Mike also showed us a canny tester he made that enables one to conveniently measure the current in a mains appliance by way of a clamp-on ammeter that clamps around an insulated single wire loop that extends from an insulated socket box.

Nick / ZS1ZD was next. He showed us a directional DF antenna that uses two loops (etched on a printed circuit board) in the same plane. It works on 144 Mhz / 2 metres. It has a small amplifier and detector circuit that drives a meter to indicate maximum signal. Sensitivity is deliberately reduced as one approaches the fox by way of three switchable ranges and a variable gain control, to obtain a proper null on the meter.

Tom / ZS1TA followed, with a demonstration of various things:

Firstly, he showed us PowerPoint slides of the noisy conditions at his QTH, especially on 40 and 80 metres. He shared with us his dealings with the municipal power authorities.

Then he showed us a solid project box for a homebrew azimuth-elevation control box that he started building some time ago.

Then he showed us an extensive series of SSTV images he has managed to send and receive by satellite using MMSTV.

Finally he showed us a project he is working on to control satellite tracking antennas with Arduino  / Rasberry Pi type of controllers.

Chris / ZS1CDG was next with two beautifully constructed projects. First was a morse code keyer that can send and read CW signals. Neatly constructed with an LCD readout. Then he also showed us a working milliWatt 10 metre band beacon that he has built. He demonstrated it live on one of the ham rigs in the shack. It transmits a repeating CW ID message.

ZS1AGH / John was next. He showed us an  app available for Android Smart phones for teaching morse code via the Koch method. This app, by IZ2UUF, can be downloaded and used by anyone with an Android smartphone.

Richard / ZS1RIC was up next. He showed us two mast constructions that are small-scale models for bigger ones that he has done as a project for other radio hams. The first is a winch arrangement for a coaxial mast, very similar in fact the the CTARC main mast which he constructed for our club. The second was an ingenious fold-over mast with a thrust bearing in the base, where the rotator may be positioned at the bottom of the mast, allowing easy access for maintenance. Both very well conceived and manufactured items.

Hans-Jurgen / ZS1HJH showed us a very fancy (and surprisingly inexpensive, for what it is) Software Defined Radio he obtained recently. The item, smaller than a pack of cigarettes, covers from 10 kHz up to 2 GHz, with a visible waterfall bandwidth (depending on the kind of computer you run it on) of up to 10 MHz continuous display and recording. Hans-Jurgen, who is no stranger to high-end specification and measurement, put the SDR through its paces and found it to be accurate in frequency to a few Hz at 1.5 GHz, and very accurate in terms of signal level measurement too. Later on he demo'd the unit with the accompanying SdrUno software, running on a PC tablet. Very impressive.

With the  Show and Tell section complete, we then held the raffle for the club’s Antenna Fund. Tickets had been on sale for R5-00 since the start of the meeting. Hylton / ZR1HPC managed the raffle and invited Paulo / IU2EFB to draw the winning ticket at random. The raffle was won by Tony / ZS1TK, who generously donated his portion of the takings back to the club. Thank, you, Tony!

The formal section of the meeting concluded, members then had the chance to chat over a cup of coffee and to buy and sell items at the Swop Shop. (ZS1SX, ZS1FP and ZS1TM all brought a variety of items along, and parted with some of them). The club still has a few bits and pieces available, which members will be able to peruse at our next meeting in October.

All in all a most interesting afternoon. Thanks to Rob for running the meeting, to all the participants who Showed and Told, and to all who attended.

Our next main members meeting at the clubhouse will be on Saturday 28 October. More details to be announced on the bulletins, in Ragchew and here on this blogspot.
Posted by Cape Town Amateur Radio Centre at 12:00
Email ThisBlogThis!Share to TwitterShare to FacebookShare to Pinterest
Labels: 2017, clubhouse, CTARC, meeting, photos, report, september, show and tell, swops, zr1gft, zs1agh, zs1cdg, zs1fp, zs1fw, zs1hjh, zs1ric, ZS1SA, zs1ta, zs1tk 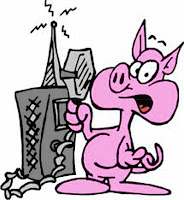 Our next monthly meeting of the Cape Town Amateur Radio Centre will be at 14h00 at the clubhouse on Saturday 23 September 2017.

The meeting will be the popular "Show-and-Tell" format, where you can bring along various bits and pieces of ham equipment to demonstrate to all present. That can be any new or ongoing projects you may be involved with or even an older project. Homebrew projects are always greeted with enthusiasm. Hints and Kinks are also welcome and encouraged. Come along to the Clubhouse and bring the actual project to show, or just chat about the new ideas you may have and are trying out in the shack.

This is always a very well attended and supported meeting, lots of information gets bandied about, and a good old 'Ragchew' with the guys for the afternoon..

We will also resume the regular Swop Shop, where you can bring various ham items surplus to requirements for sale, swop or disposal. Come early to get a good spot for your project or Bring and Buy item (Please remember to take home afterwards any of your equipment you didn't manage to sell).

Looking forward to seeing you on Saturday 23rd!

It is with sadness and regret that we learned this week of the recent passing of Geoff Tyler / ZR1GFT.

Geoff was a retired electronics instructor at the Simonstown naval base and long-time friend of the late Bud / ZS1B. The two of them were instrumental in beginning our first International Light House weekend operations at the Green Point lighthouse 20 years ago.

Our thoughts go to Geoff’s xyl Val, family and friends.

A memorial service will be held, but details of this will be published later.
Posted by Cape Town Amateur Radio Centre at 12:00
Email ThisBlogThis!Share to TwitterShare to FacebookShare to Pinterest
Labels: 2017, CTARC, in memorium, september, silent key, zr1gft

Here are photos of the Antenna Work Party held at the Cape Town Amateur Radio Centre on Saturday 16 September 2017.

The report is [here]. 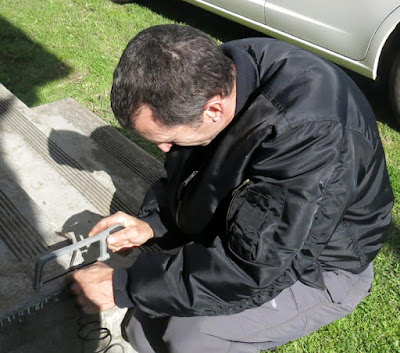 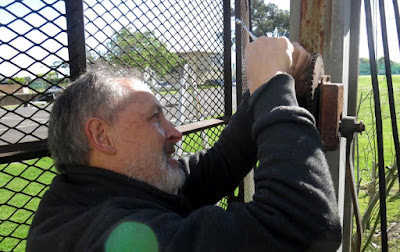 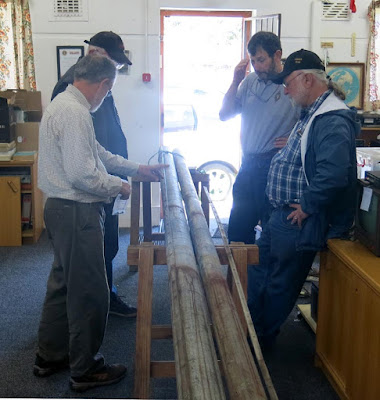 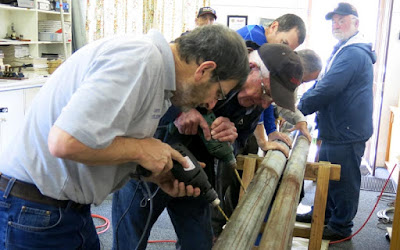 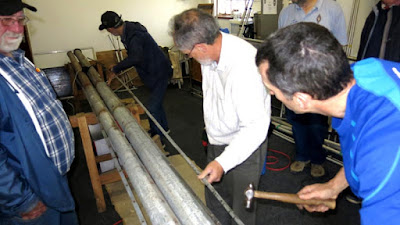 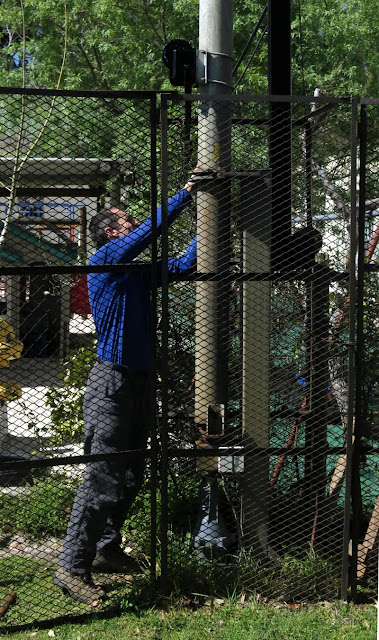