On Saturday, 27 February 2016, the Cape Town Amateur Radio Centre held its regular monthly members' meeting at 14h00 at the CTARC clubhouse in Rondebosch.

The meeting was well attended. Our Chairman, Rob /ZS1SA started with a report back on the Committee Meeting (held on the Monday beforehand). Our clubhouse manager, Noel / ZS1FW, announced there will be a Work Party on 19 March to do essential antenna and feed-line maintenance work.

Rob also took a straw poll to see how many members would be interested in attending our 70th Anniversary Function to be held later on this year - the response was very promising.

We then proceeded to the main topic of the afternoon, which was a talk ably given by Rob on his Tri-Bander Coaxial Trapped Dipole antenna. This useful antenna, which Rob has been developing and working regular HF contacts with over the past year, is unique in that the traps are constructed of coaxial coils only (no capacitors are used, as the capacitance is inherent in the loops of RG58 coax cable traps, wound around sections of plastic plumbers pipe).

The antenna gives you three bands - 20m, 40m and 80m. The first two bands are fully covered, with an SWR of 2:1 or better over the full bandwidth of each band. However, the trade-off is that the 80m bandwidth is quite narrow - typically just 25 kHz wide. However, that is not too bad performance considering the antenna, when used in an inverted-V configuration, is just 29m wide.

Rob showed us a freeware calculator programme by VE6YP which calculates the dimensions and windings of the coils for certain frequencies. He also discussed the design and construction of the antenna, with the use of stainless steel bolts and wingnuts on the traps to facilitate easier adjustment of the various elements to tune it to perfection. It was noted that the copper wire used has a tendency to stretch over time and in the wind (Rob's QTH is located in a Wind Tunnel on the Table Mountainside...) and lower the resonant frequencies involved. However, once readjusted to accomodate this, the antenna's resonant frequencies have stabilised over time.

The antenna is fed with coaxial line, that connects into a 1:1 balun at the central feed point on the apex. Rob showed us how the resonant frequency of the traps can be altered by stretching out or narrowing up the coaxial coil winding on its former. A surprisingly wide variation in frequency can be obtained. Once adjusted for resonance, the coax trap coils can be fixed in place with a marine varnish, which doesn't appear to alter the frequency of the trap once dry.

Rob demonstrated how to test the trap for its resonant frequency using an MFJ Antenna Analyser with a homebrew coupling coil that is placed just inside the coil former.

The power handling of the antenna is limited by that of the central balun at the feed point. In the case of the antenna Rob handed around for us to see, that was rated at around 150W, but full legal limit could be handled if a more robust balun (or possible an "Ugly Balun") is used. One point Rob emphasized is that inexpensive coax provides inconsistent results when it comes to tuning. Far better (and more predictable) results were obtained by using Military Spec coax cable for the traps.

An emphatic comment from the floor (by John /ZS1AGH) stressed that one must NOT use electrical conduit for the coil formers. That material is conductive (as can be proven by testing a section of it in a microwave oven with a glass of water inside). If it heats up, the former is conductive. (The glass of water is to protect the microwave oven itself! Thanks To Frank /ZS1CM for that advice).

Thanks to Rob for delivering a fascinating talk indeed - one that inspired us all to go out and build our own antennae!

You can download Rob's Powerpoint slide show of his talk [here]. 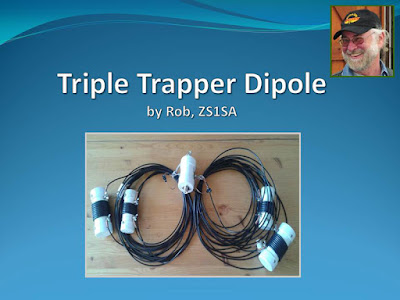 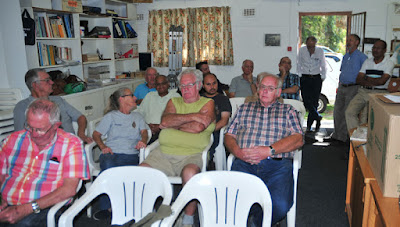 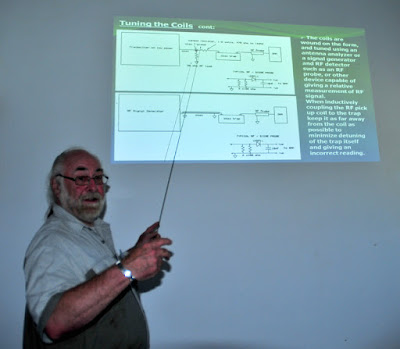 Here is an item that didn't quite make it to the most recent Ragchew magazine's Swop Shop pages.

On offer is one Hi-Gain Triband Yagi beam antenna complete with tower, rotator and cables. This is a seriously capable HF antenna, currently located at the QTH of Jan / ZS1JH in Paarl, Western Cape.

Owing to its size and weight, this item is for collection only by the purchaser, who must dismantle and remove the antenna, tower and associated cables and equipment from where it is currently situated.

There will be a meeting for members of the CTARC committee, at 19h00 on Monday, 22 February 2016, at the CTARC Clubhouse.

The February 2016 edition of the Cape Town Amateur Radio Centre's bi-monthly newsletter "Ragchew" has been published.

You can download the February Newsletter as a PDF directly from [here]. 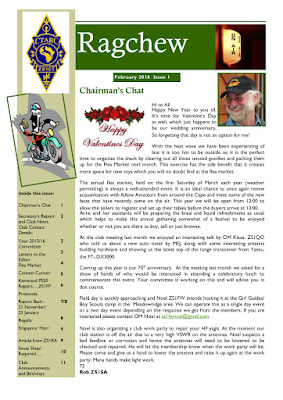