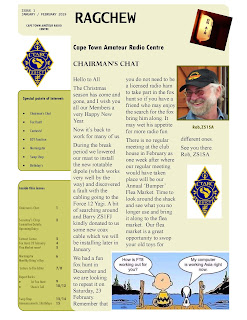 Henceforth, all non-electronic communications are to be sent, please, to the following P O Box address:

Here are photos of the January 2019 meeting at the CTARC clubhouse. Grateful thanks to Chris ZS1CDG and Nick ZS1ZD for providing the photos.

The written report-back is [here]. 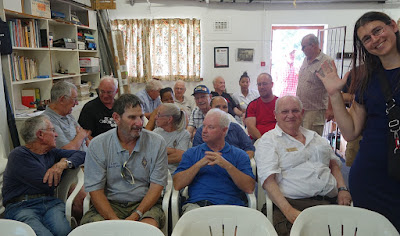 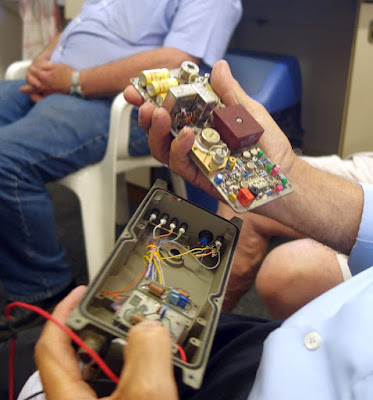 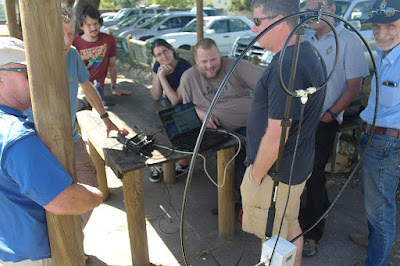 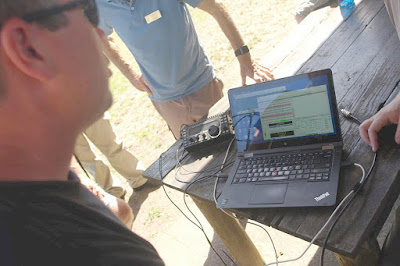 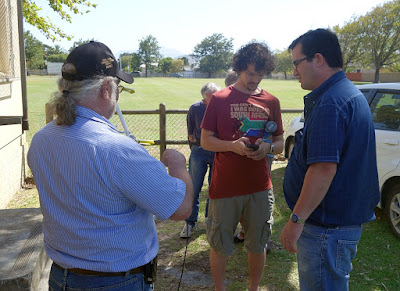 On Saturday, 26 January 2019, the first meeting of the year for the Cape Town Amateur Radio Centre started earlier than normal with the Antenna Work Party which began at 11h00.

The main monthly meeting started at about 14h20, a few minutes later than scheduled, as we were still finalizing the antenna workshop. By the time our chairman, Rob ZS1SA called the meeting to order with the customary “ding!”, the clubhouse was packed. Rob welcomed us all to the meeting, gave a brief report on the morning’s work party, and welcomed the new members who have recently joined CTARC. They are Bruce Mitchell, Peter Fenwick, Thian ZS2Y. Colin ZS1RS and Rob ZS1RDM. Rob also welcomed visitors Anne, Malobu and David W5TN who is visiting us from Texas USA. Rob also passed on the sad news and our club’s condolences to Peter ZS1PGC, whose wife Jenny passed away recently.

The clubs physical postal address has changed. Henceforth, all non-electronic snail-mail is to be sent, please, to the following P O Box address:


Rob mentioned that the Morningstar remote station is in regular use, but there is still capacity for more members to subscribe to use it. There is also a regular subscriber to the system, Andy, who uses the station to connect with yachts offshore from Cape Town, but this is only for a short period each day.

Rob also thanked Chris ZS1CDG for putting CTARC on Instagram, which we all hope will increase interest in our club among the youth.

Thanks were also offered to Barry ZS1FJ who has most generously donated the 40m dipole that has been installed on our main rotational tower, as well as the RG-8X co-ax feedline which had been installed that morning.

Dennis ZS1AU offered to show us a video of the DXpedition to Sable Island; sadly, we didn’t have time in this month’s meeting, but that’s a good possibility for another meeting.

The other usual admin notices [to please collect your CTARC magnetic club badges, which are stuck on the club fridge; remember to remove your unsold Swop Shop items at the end of the meeting] and then we were ready for the main event – Show and Tell.

Rob kicked off the first presentation with a magnificent portable tape-measure DF Yagi antenna, hand-made out of tape measures, plastic conduit and coax. The antenna is lightweight and features a wound coax balun half-way down the boom to match the antenna and to reduce the effects of hand-capacitance while pointing the beam at the fox.

Rob also showed us a very nifty hand-made DF attenuator, consisting of a BNC plug attached to a coaxial PL-259 plug, that screws into an SO-239 adaptor which in turn is mounted on the handie radio. The attenuator works by way of a capacitive link, and as you unscrew the device, the gap between an insulated pin in the BNC and the actual SO-239 socket is widened - to provide up to 65 dB of attenuation - a very necessary signal reduction when one is close to the fox itself! If further attenuation were needed, further such widgets could be daisy-chained together in series.

Next up was Keverne ZS1ABU, who showed us a very nifty dual band VHF/UHF Amsat antenna. Being dual-band (2m & 70 cm), one can work uplink on one frequency and downlink on another, with your dual-band rig connected to the antenna. Consisting of a carry-bag, several colour-coded plastic insulators and several light steel poles, the item is very portable for SOTA-type activities, and can be assembled in under a minute. The whole thing including cable and carry bag is on sale for just R250+postage from AmsatSA.

Nick, ZS1ZD followed on. He showed us an inexpensive portable shortwave receiver of Chinese origin, which is insensitive, provides distorted audio of dubious quality into its tinny little speaker and unsurprisingly was bought for the price of a boerewors roll at the flea market! However, it is lightweight and is ideal for hunting down sources of noise and RFI in the shack, around the house and in the neighbourhood. Being multi-band, the little AM/FM receiver also gives a broad indication of where the noise happens ion the HF spectrum.

Chris ZS1CDG was next. He showed us a beautifully-constructed little weather station-on-a-chip. Using an Arduino-type of microprocessor and wi-fi, it connects to his PC which in turn fetches the relevant local weather data from a website. Chris humbly described his project as “cobbling together stuff he found” but he is the one with the wit, vision and initiative to have actually made the project happen and work. Well done!

Next up was Rob ZS1RDM who loaded down the speakers table with three large B25-type green military HF radios. Rob collects these and has a number of them, which he has lovingly restored to working order. He gave us a breakdown of the variants - a manpack, a mobile station, and a base station with a linear amplifier. It was interesting to see the solid mil-spec construction and design of these rigs of the 1970’s and ‘80’s era, which when properly aligned, can still give a good account of themselves in terms of sensitivity, stability and cleanness of output. Robs believes they also are great for showing off amateur radio to the public at meetings and displays.

Later on outside, David W5TN Set up his magnetic loop antenna and Elecraft K3 to show us portable QRP operation using FT8 mode. Most impressive!

With that, the formal meeting was ended and we carried on to discuss matters, skinner and catch up on the news over coffee and biscuits until about 16h45. A most productive and successful meeting indeed.

Our next meeting, on 23 February 2019 at 14h00, will take place in the form of another fox hunt. On 2 March we will have the annual Mega Flea-Market, and on 23 March Robs ZS1TA will present a talk on LEO [Low Earth Orbit] satellites. So, plenty to see and do in the next few months!

On Saturday, 26 January 2019, the first meeting of the year for the Cape Town Amateur Radio Centre started earlier than normal. At 11h00, we assembled at the clubhouse to tackle the next phase of our main antenna refurbishment. Under a cloudless sky with a mild south-easter blowing, the coaxial mast was cranked down and then folded over on its main hinge to rest on a conveniently positioned ladder. The next stage was to replace the main feedlines with fresh RG-8X coax cable, generously donated to the club by Barry ZS1FJ. Thanks to ZS1BL, ZS1BOK, ZS1EQ, ZS1FJ, ZS1FW, ZS1PGC ZS1S, ZS1TK, ZS1ZD, ZS1ZKZ and others who attended the work party.

There was a minor set-back when the stainless steel cable snapped while being winched [fortunately with the mast still lying horizontal!], but we still had the old steel cable that was now redeployed as a temporary measure. The mast was winched back into vertical position just as the other club members arrived for the main meeting.

The purpose of the work party was to replace the main feedline to the antennas with some RG-8X coax [kindly donated by Barry ZS1FJ] , and to do some work on the baluns and attachments for the new 40m beam that was recently mounted on the tower. This was achieved in time for our main meeting which followed on at 14h20.

Thanks to all those who attended and assisted with the Work Party! 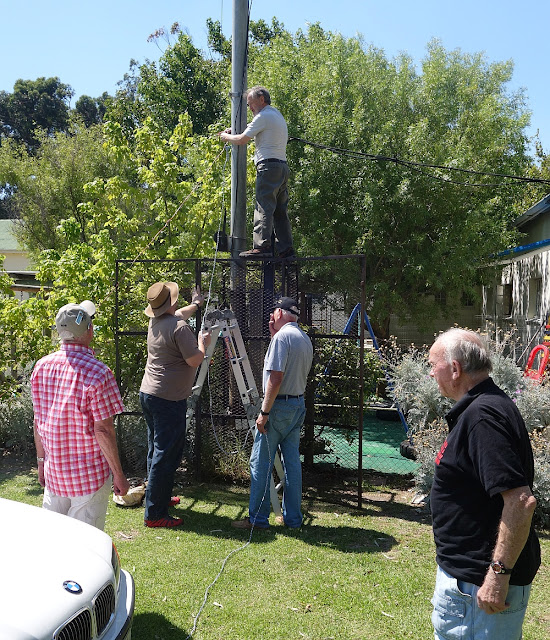 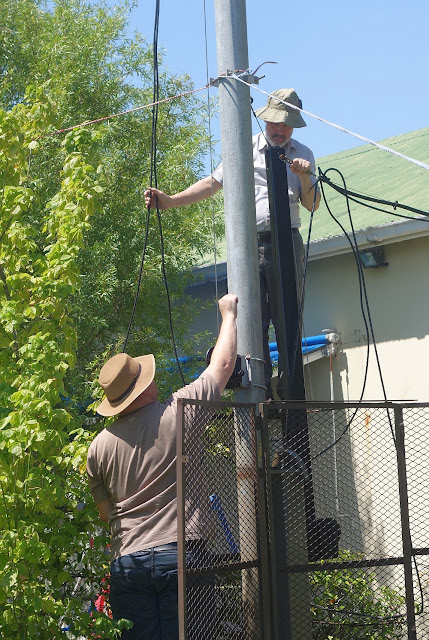 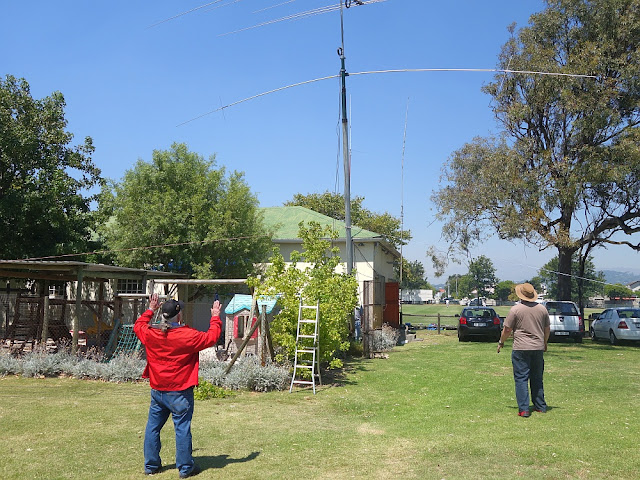 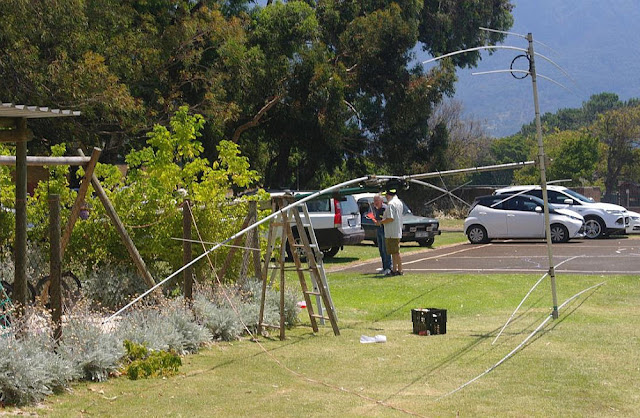 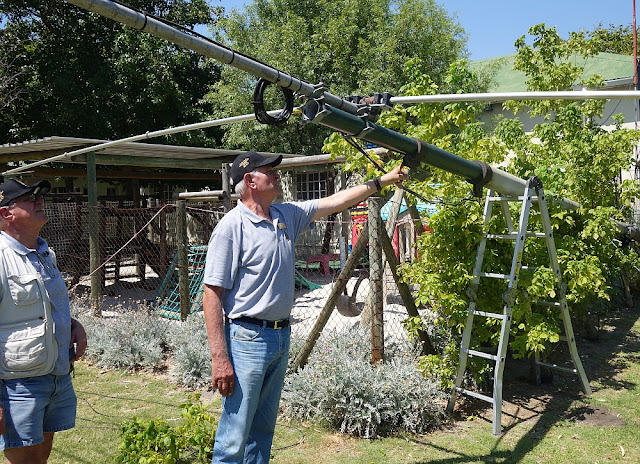 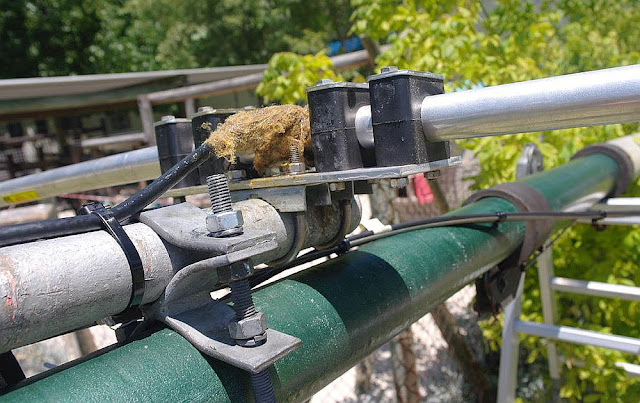 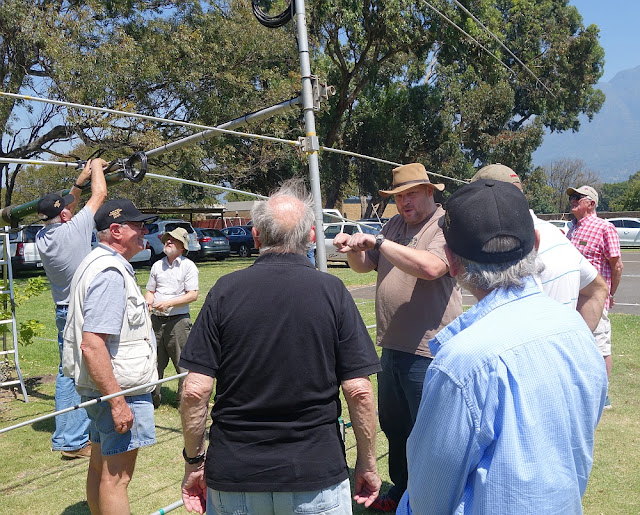 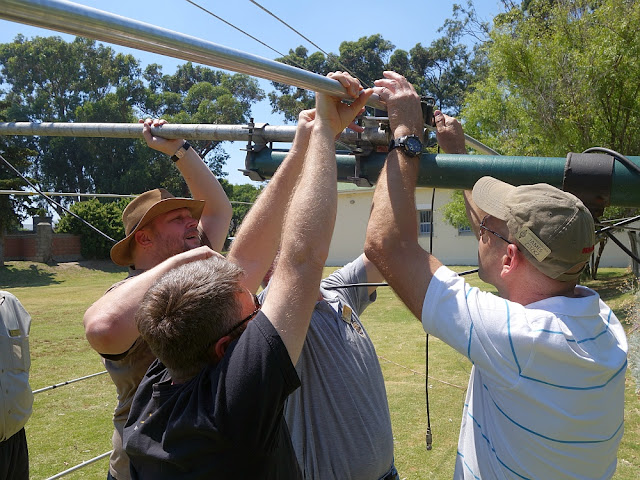 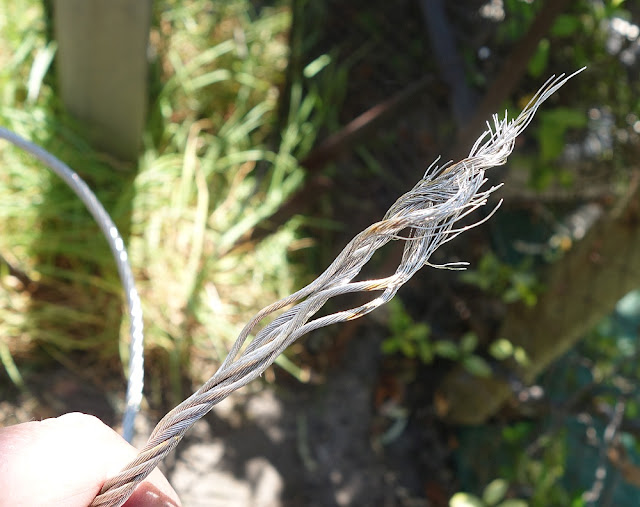 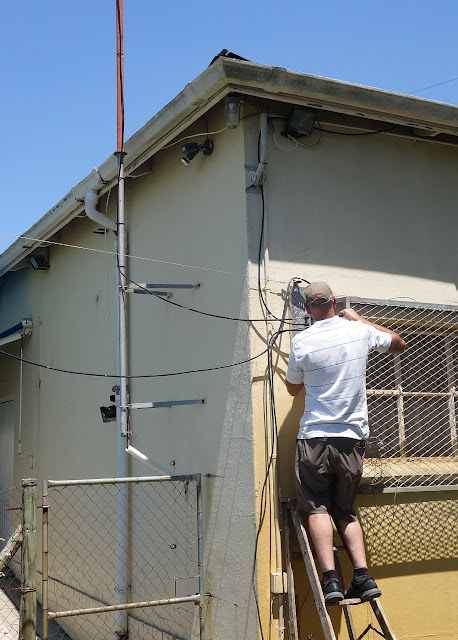 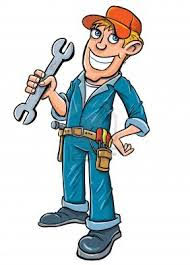 On Saturday, 26 January 2019, before the Monthly meeting, the club is going to have a work party to replace the two co-axial cables on our tower.

The Committee asks if members are able to help, please come to the clubhouse about 11h00 .

This event has now taken place