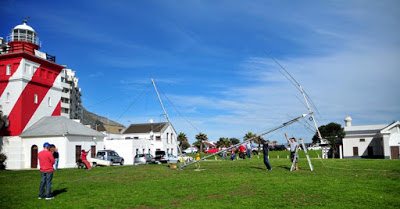 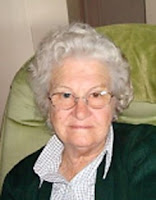 It is with regret that we have to report that Joan, the XYL of Dennis / ZS1AU, passed away on the morning of Friday 18 August 2017, following a long illness.

Our thoughts are with Dennis and his daughter Jeanette at this sad time.
Posted by Cape Town Amateur Radio Centre at 12:00
Email ThisBlogThis!Share to TwitterShare to FacebookShare to Pinterest
Labels: 2017, august, CTARC, in memorium, joan wells, silent key, xyl, zs1au 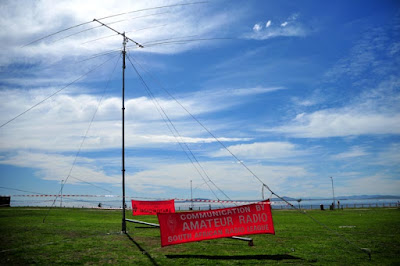 Things are humming at the Green Point Lighthouse right now. At 08h30 this morning (Saturday 19 August 2017) the CTARC members met at the clubhouse in Rondebosch and loaded up the radios, rotatable mast, beam antenna and other gear. Paul / ZS1S brought his trailer along, which enables transportation of the heavy gear with relative ease.

At about 09h45 we were at the lighthouse, and Noel / ZS1FW and Paul / ZS1PXK started assembling the beam antenna, which process goes quite smoothy these days. At the same time, Danny / ZS1BL and Rob / ZS1SA started setting up equipment in the Ops Room. Danny discovered a problem with the power cables and last-minute emergency repairs were effected. The 40 / 80 metre dipole was strung up by Matt / ZS1MTF and Rob. An intermittent fault was discovered and fixed on the dipole. Nick / ZS1ZD set up the 2m antenna and wandered around taking photos. Others were on hand to help as well, in the form of Barry / ZS1FJ, Keverne / ZS1ABU, John / ZS1AGH & Elsabe, Pieter / ZS1PGC, Lem / ZS1LEM, Chris / ZS1CDG (who is busy compiling a video of proceedings), Tony / ZS1TK and others. The beam antenna went up without a problem and the banners advertising our club have been mounted on the antenna stays and also on the top railing of the lighthouse.

From the start, there have been a number of interested enquiries from dogwalkers, passers-by and interested parties who are visiting in response to adverts they have seen or heard of this annual event.

The weather was spectacular in the morning to midday -  a maximum of 25 degrees and sunny. We hope that continues into the late afternoon as we will hold a braai at the lighthouse at about 18h00, which is always a great event.

The radio weather is also not oo bad, considering where we are in the solar cycle. Today's sunspot numbers (courtesy of Paul Herrman / N0NBH) are as indicated. The Planetary A-Index is a bit active at 21, and the K-index similarly active at 4, but the sunspot count has increased from its measly 12 of the last few days up to 41.

The ZS1CT /L station is active right now, on 20, 40 and 80 metres, with contacts being made this midday and afternoon with local stations in Divisions 1, 2 3, 4 and 6. Rob / ZS1SA made contact with a station in Sao Paulo, Brazil, and DX from Europe is coming in, too. We will see how well we fare this afternoon and evening, as we will be operating through the night.

Tomorrow (Sunday 20 August) we will dismantle the station and antennas at around midday, and would appreciate the assistance of CTARC members to help us take down the main antenna then. 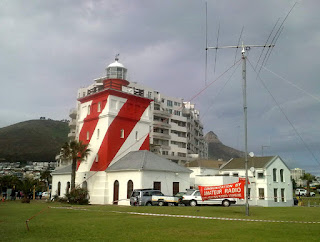 ​
It’s that time of year again when CTARC prepares for the International Lightship and Lighthouse weekend. This year it seems a bit later in the month but actually it’s not. It is always the third FULL weekend in August. For us down in the Southern Hemisphere it’s a time of cold weather and storms which makes it even more challenging.

​Once again we have arranged to man the Green Point lighthouse from the Saturday morning of 19 August until mid-day Sunday of 20 August. We have repeated this so often now that our Lighthouse team manages to do the set-up and take-down with military precision but we still need manpower from our members, especially around 10:00 on Saturday morning in order to get our beam antenna raised.

Even if you are not taking part in the Lighthouse weekend, it would be appreciated if club members could come and assist with the set up at Green Point on Saturday morning 19 August 10h00 and for take down on Sunday, 20th August at 11h00. (Committee members will meet at the clubhouse at 08h30 on Saturday morning to load antennas and equipment).

We will be having our very popular and always well attended Sunset Bring n Braai on the Saturday evening so even if you are not planning to operate, please join us and bring the XYL along for this social event. Bring your meat, rolls and salads etc; along.

We need operators for the event so please pop in and grab a mike or key and make a few contacts with us, it’s always great fun.

If you are planning on staying over (the more the merrier,) then please do let me know soonest and I can arrange enough room for us all. We already have 5 staying over this year, which is great news.

CTARC Committee Members are reminded of the earlier-than-usual committee meeting that will take place on Monday 14 August 2017, at 19h00 at the CTARC Clubhouse.

The main purpose of this meeting will be the planning and logistics of the forthcoming International Lighthouse/ Lightship Weekend set to take place at Green Point Lighthouse on the weekend of 19 / 20 August 2017.

Please note that from Sunday 13 August 2017 onwards (for the time being), the SARL HQ and CTARC Bulletins will be transmitted on the 145.600 MHz repeater on Hanskop near Sir Lowry's Pass, at 08h30 local time.

There is a link to the 145.750 MHz repeater (albeit with reduced audio levels and signal strength) as well.

We also hope to have an Echolink relay as well.

The August 2017 edition of the Cape Town Amateur Radio Centre's bi-monthly newsletter "Ragchew" is now published. Grateful thanks once again to Anne for another fine edition! 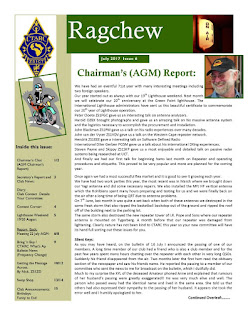 On Saturday 29 July 2017, CTARC members met at the clubhouse to do some urgent repair and maintenance work on the clubs antennas.

More details will be added presently.

In the mean time, Chris / ZS1CDG shot a video of the work being done. Thanks so much, Chris!