Mike /G7TWC and Dave /GI4FUM visited us on Saturday for our monthly meeting. They are both on holiday with their families and took time out to join us for an eyeball and a bit of radio play. Dave delivered the talk to the club members and Mike did most of the operating ZS1CT in the CQ WW-SSB contest. Conditions were trying, Mike was somewhat shell-shocked by the propagation conditions. Mike who is clearly a seasoned contester had to juggle his family commitments with the urge to play radio. He did very well, working 177 stations and 6 different CQ Zones over a few hours on Saturday and Sunday. He worked 10,15,20 and 40m with 10m being the most productive. The most exciting contacts were the contacts made to Alaska and our antipodes, Hawaii.

Below is a summary of the logbook from the competition:

The CTARC held its October meeting at 14h00 on Saturday, 25 October 2014 at the clubhouse. The meeting was well attended. As planned, Dr David Hutchison / GI4FUM (and EI4DJ) gave a talk on his experiences in Amateur Radio and various DXpeditions he has been on.

Continuing a family tradition in medical health care (his father ran a successful dental practise in Observatory in Cape Town for years), David trained as an anaesthetist, and later worked as a GP in Ireland. He obtained his first radio ham license (callsign GI8MIV) at a young age. His studies required him to take a break from the hobby but he returned to amateur radio as GI4FUM, whch callsign he currently holds.

David showed us a slide show of his activities and a video of the March 2007 Swaziland DXpedition he took part in. He has been on a number of DXeditions in Africa, as C91DJ in Mozambique, V55B in Oranjemund and 3DA0DJ in Swaziland. Being active in the Scouting movement, David also set up and ran the first ever Swaziland JOTA station, 3DA0SS, a project which he hopes to re-activate in the future.

He also was involved in the G100MGY special event station to commemorate the centenary of the sinking of the Titanic (which was built in Belfast). MGY was the Titanic's callsign on that fateful night it sent out it's emergency SOS messages after hitting an iceberg in the north Atlantic Ocean.

Ham radio runs in David's family - his XYL Gillian holds the callsign GI8MIV (which was David's original callsign) and his son is GI7EXM.

David is here in Cape Town until 4th November. We thank him for his interesting talk, hope to hear him often on the bands and wish him and his family a pleasant holiday. 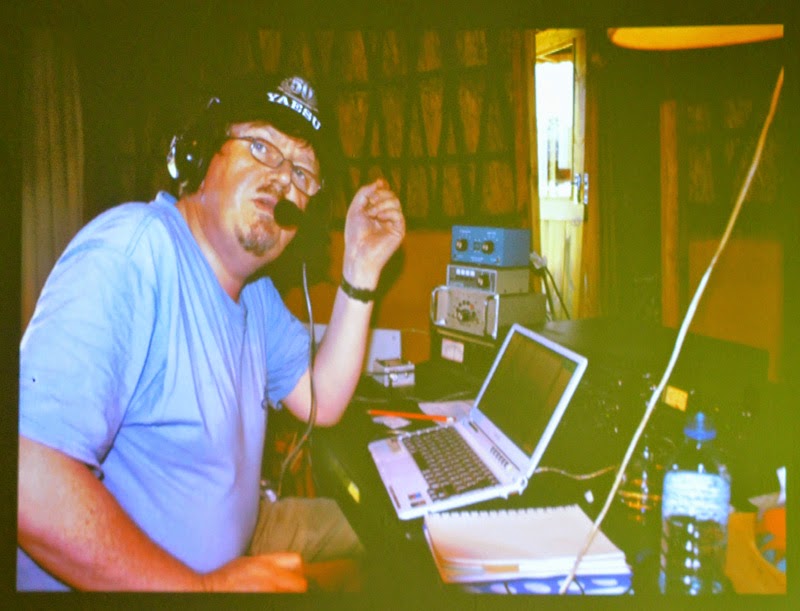 The Cape Town Amateur Radio Centre will run a Field Day operation from the CTARC Clubhouse at the clubhouse in the Belvedere Community Centre at Keurboom Park, Chess Road Rondebosch on the 15th November 2014.

Please note that while the National Field Day exercise runs officially from 12h00 B: on 15 November to 12h00 B: on 16 November, CTARC will run the station on Saturday 15th ONLY.

The station will be run off the grid and be powered by battery and solar energy with a back-up generator. Station set-up is scheduled for 09h00 and will be dismantled around 18h00. There will be a bring and braai, we will start the fires around 17h30.

Please pay us a visit to participate in operating the station or to assist with the setup and dismantling operations.

We hope to see you all.
Posted by Cape Town Amateur Radio Centre at 12:00
Email ThisBlogThis!Share to TwitterShare to FacebookShare to Pinterest
Labels: 2014, braai, CTARC, field station, meeting, november

Following a recent CTARC committee meeting, it has been recognised that there is a need to assist prospective radio amateurs in our area who want to write the Radio Amateurs Examination. Passing the RAE is a necessary step to obtain the Amateur Radio Operators license.

Our club is looking for suitably capable, qualified and reliable volunteers who are able to assist with this training programme. The idea here is to share the teaching load, to ensure that one person does not have to run the entire course alone!

Our club has provided such training in the past and looks forward to adding new members to the hobby in the future!

Should you be such a volunteer, please contact the Secretary via e-mail.
Posted by Cape Town Amateur Radio Centre at 12:00
Email ThisBlogThis!Share to TwitterShare to FacebookShare to Pinterest
Labels: 2014, 2015, CTARC, october, rae, secretary

On Saturday 25 October at 14h00, the Cape Town Amateur Radio Centre will meet at the Belvedere Community Centre, off Laidlaw Lane in Rondebosch, for their monthly meeting.

We are greatly priviledged to have Dr David Hutchison joining us for this meeting. He will deliver a talk which we are sure will be well worth hearing.

He is a man of many talents and interests:

In addition to being a General Practitioner (now retired), he is a keen radio amateur and a member of the Irish Radio Transmitter Society. He's a keen DX-er, a contest operator (who has won some S A Radio League trophies in his time), as well as being the Director of the Northern Ireland Sports Shooting Federation. He has been associated with the British Olympic Sports Shooting Association for 20 years. He's also a keen digital photographer.

David is also an old Capetonian with roots in this city (his father was a dentist in Observatory). David is a regular visitor to South Africa. This time, he would like to take part in some radio contests, and will be making use of the CTARC facilities during his stay.

We look forward to meeting him on Saturday. We hope you will all make the effort to attend. All are (as ever) most welcome!
Posted by Cape Town Amateur Radio Centre at 12:00
Email ThisBlogThis!Share to TwitterShare to FacebookShare to Pinterest
Labels: 2014, CTARC, meeting, october

We welcome Hylton Conacher, ZS1HPC, who joined the ranks of the Cape Town Amateur Radio Centre in September this year. We hope your association with our club will be a long and happy one, Hylton!
Posted by Cape Town Amateur Radio Centre at 12:00
Email ThisBlogThis!Share to TwitterShare to FacebookShare to Pinterest
Labels: 2014, CTARC, membership, new member, october

The annual SARL Radio Technology in Action roadshow will be held in Cape Town, at the Cape Peninsula University of Technology campus in Bellville on Saturday 1 November 2014. Registration opens at 08h30 and the conference proper will start at 09h00.

It promises, as always, to be a very interesting event and well worth attending.

One of the topics covered is a transceiver control interface kit that works through a USB port, and these kits, as well as a CD, can be ordered on the registration form.

Registration (for SARL members) - if you register before 28 October - is R100-00. If you register after that date, it will cost R130-00. Students can register for a reduced fee. Non-SARL members may attend the conference, but at a higher fee.

The list of topics to be covered at the conference, registration fees, the registration form and further details, are to be found at:
http://www.amateurradio.org.za/RTACT2014.htm

On Thursday, 16 October 2014, prospective radio amateur candidates will be writing the Radio Amateur Exam nationwide. Two groups will be writing the exam in the Western Cape - one at the Oakdale Club - Amateur Radio section, and another at the Cape Peninsula University of Technology campus in Bellville.

We wish all of those who will be writing the very best of good luck for the exam!
Posted by Cape Town Amateur Radio Centre at 12:00
Email ThisBlogThis!Share to TwitterShare to FacebookShare to Pinterest
Labels: 2014, CTARC, october, rae

You are kindly reminded that you have but a week to submit your articles for the October 2014 edition of Ragchew, the CTARC's bi-monthly newsletter. Articles and adverts for the Swop Shop page must please reach Anne by 15 October 2014.

A reminder of the forthcoming meeting for committee members of the CTARC.