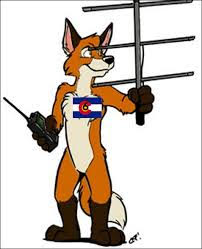 The event was attended by Jonathan ZS1ARB, Rob ZS1SA and Colin ZS1RS. The timing of the event on the public holiday seemed like a good idea a month ago but as it was, there were at least a half dozen apologies by members via WhatsApp before the event started, promising to attend the next one (which will take place sometime in March 2019 - final date still to be confirmed).

The fox was hidden by a volunteer and found in a parked car on a nearby street in Rondebosch. It was then moved and hidden again under the bushes near our club house. We were grateful as that is where we had left our cars! In both cases, Colin located the fox a good 5 minutes before the other hunters were on the scene, but we were close behind.

We learned quite a bit about the idiosyncrasies of our various antennas and hunting methods. For one thing, I learned to not put the fox’s frequency in a memory in the radio, and rather to use the VFO of the radio so you can tune off a few kilohertz when you are close, in order, to lower the signal into your receiver.

Great fun was had by all and we are looking forward to the next event with even more hunters on the trail.

Below, left to right are Rob ZS1SA, Jonathan ZS1ARB and Colin ZS1RS with their DF-hunting Yagis. Can you find the fox? it's in the picture - somewhere [the answer is below the photo...] 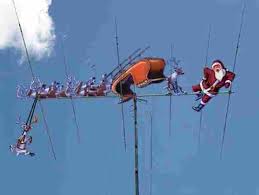 The Cape Town Amateur Radio Centre wishes all its members, friends and families best compliments of the festive season for 2018!


Thank you to all for your contributions to club activities and for your fellowship throughout the year.

If you hear unusual sounds late on Xmas Eve, be sure to check your antenna outside...

We look forward to seeing you all in the new year!
Posted by Cape Town Amateur Radio Centre at 12:00
Email ThisBlogThis!Share to TwitterShare to FacebookShare to Pinterest
Labels: 2018, christmas, CTARC, december 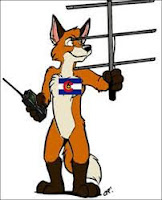 Since there is no formal meeting in December we will be having our first fox hunt that month on the public holiday of 17 December 2018.

It is estimated that this foxhunt will take about 90 minutes maximum. The minimum equipment you will need is your 2 meter handheld and a directional antenna of some sort. A simple compass will also come in handy. Come as an individual or form a team with a friend.

If you are interested in taking part in this fun event please contact Rob ZS1SA and we can form a group to make final arrangements.

Please meet at the club house at 10h30 on Monday, 17 December for the briefing and the start.

Note: This even has now taken place. The report back is [here]. 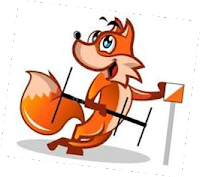 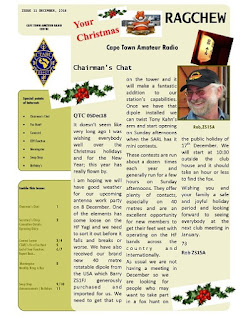 We have decided to have an Antenna Work Party on Saturday 8 December.
Paul, ZS1S, will be ‘Commander in Chief’ for the day!

We will be lowering the tower and repairing the Yagi antenna, and also installing the new Dipole antenna that Barry ZS1FJ kindly purchased for us from the USA.

All members are welcome if you can please spare an hour or two to have some fun whilst helping your club maintain the equipment. Do bring your own lunch.