Going back in time is a good way to show newcomers what it was like in the ‘Good Ole’ Days’. Those were the days when clubs were called ‘Branches’, you paid your SARL subscriptions and nominated which ‘Branch’ you wanted to support. The SARL HQ was then based in Cape Town, Sorry about the picture quality but they were not taken with a digital camera Hi!

Here (below) we have the Cape Town Branch committee: (also 1975/6 vintage) 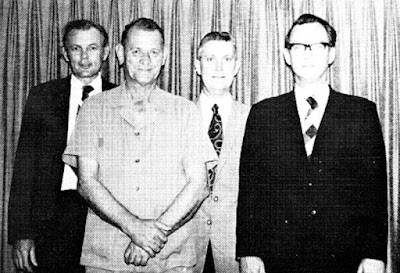 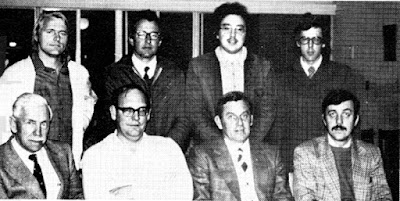 Front row, left to right: George Doudney /ZS1SP, Greg Roberts /ZS1BI, Uli Denning /ZS1UD (Chairman), Ian Simpson /ZS1IS, and missing is Dave Perry /ZS1SG. (Dave must have been somewhere in the mountains with his beloved repeaters when this photo was taken.)

The Cape Town club had quite a number of venues for the monthly meetings but eventually settled with a clubhouse of their own in Rondebosch.

There is such a lot in the history of Amateur Radio in the Cape. It would fill too many pages for this newsletter. I think it would be a good idea to get it down in black and white for the benefit of those who follow in our footsteps. I’m asking all old timers with faded memories to put something down on paper so that whatever it is can be recorded for future generations. There must be hundreds of photographs but they need some sort of explanation so get your pens and paper out and make a start. Don’t worry about spelling mistakes, the computer looks after that side. Get your copy to me in whichever way you prefer. Contact Bernie / ZS1BW [here].
Posted by Cape Town Amateur Radio Centre at 12:00