The next meeting of the Cape Town Amateur Radio Centre is the International Lighthouse/Lightship Weekend, which is scheduled to take place on Saturday 20 August and Sunday 21 August 2016. Our club will set up a radio station at the Green Point Lighthouse as it traditionally has done for a number of years.

It is a great opportunity to work local and DX lighthouse / lightship stations and radio amateurs. In the evening we usually have a braai as well, which is a great social occasion.

A heads-up to members that we will need a number of hands to help erect the antennas and set up the station on the Saturday morning, and again to dismantle it again on Sunday afternoon.

Committee members are reminded that we will have a meeting on Monday 15 August at 19h00 at the CTARC clubhouse.

If you use the Cape Town Amateur Radio Centre's 2m repeater on 145.750 MHz, please consider helping to support this popular repeater.

Your money donations can be paid to the CTARC Repeater Fund, and not just the Western Cape Repeater Working Group (WCRWG). These funds help pay for repeater maintenance and for acquisition and installation of new equipment.

Our latest issue is the antenna on the 145.750 repeater at Kanonkop. The old antenna has been up on the tower for years and needs replacement, not just maintenance.
Please send your donations directly to our club account with the reference: "CTARC Repeater Fund" to the following bank account:
Account Name – Cape Town Amateur Radio Centre
Bank – Standard Bank
Branch – CLAREMONT
Type of account: Current Account
Branch Code – 025 109
Account Number – 072 561 580
Posted by Cape Town Amateur Radio Centre at 12:01
Email ThisBlogThis!Share to TwitterShare to FacebookShare to Pinterest
Labels: 2016, CTARC, donations, july, kanonkop, repeaters

On Saturday 23 July 2016, the Cape Town Amateur Radio Centre held its AGM at 14h00. In spite of some rather soggy winter weather, the meeting was well attended.

The meeting was opened by CTARC chairman Rob / ZS1SA, who welcomed members and visitors, and then delivered his Chairman's Report for the past year.

This was followed by the Secretary's Report by our well-organised secretary, Anne.

Our vice-chairman, Noel / ZS1FW, then read out the Treasurers Report on behalf of Danny / ZS1BL who was unable to attend the meeting.

Our chairman then had the pleasant job of handing over the Club Awards for the year.

The Golden Wellie Award (the Wellington boot is in fact black in colour), which celebrates that member whose attendance of club events (through rain, hail, sleet, snow, dust storms, hurricanes and other meteorological phenomena) has been most consistent, this year was awarded to Tony / ZS1TK.

The Club Participation Award, which is awarded for significant club involvement, assistance and participation, this year was awarded to Barry / ZS1FJ in absentia.

The Buck Taylor Trophy (the CTARC's top award) was awarded to Davey / ZR1FR for his extremely helpful and generous assistance of our club recently.

At this point, the chairman stood down and handed over the reigns to John / ZS1AGH while nominations for the post of club chairman and the committee were called for. The entire committee was re-elected, with Rob as chairman, for another year. The committee's details are [here].

The formalities now concluded, the club's members and visitors were asked to briefly assemble outside the clubhouse for a group photograph (see below).

Thereafter we returned to the clubhouse for a bowl (or two) of not one but two delicious varieties of hot soup kindly provided by Anne and Elsabe, as well as a glass of warming sherry for those who required a little further warming on that cold afternoon. A good opportunity to catch up and natter with friends then ensued.

Paul / ZS1S later on continued with some repair work to the antenna cable feed-in panel, which has been in need of refurbishment since our recent Antenna Work Party.

By about 16h45 the meeting had run its course and we made our way home.

Below are some photos of the event:

This is the official notification that the Cape Town Amateur Radio Centre's 2016 Annual General Meeting has been called. This will take place at the CTARC Clubhouse at the Round table (Belvedere) Community Centre, off Laidlaw Lane in Rondebosch, at 14h00 on Saturday 23 July 2016.

A Proxy and Nomination Form:

A reminder that your annual club subscriptions for 2016 / 2017 are now due. The annual subscription fee has been increased for the first time in several years by only R20-00 and is now R120-00 for Members and R100-00 for Pensioners over 65. Remember, membership for Spouses of  club members is available at 50% of the main Members price.

(EFT is preferred if possible please, but we will be collecting cash subs and forms at the AGM. If you have already paid your subscriptions, thank you. If paying by EFT, please send me proof of payment, that your EFT payment may confirmed.)

There is a Membership / Renewal Form which has our bank details and is to please be completed if any of your contact details have changed in the past year - so that we can keep our database current.

Join us for afternoon refreshments after the meeting. We look forward to seeing you on the 23rd July.

There will be a meeting for members of the CTARC committee, at 19h00 on Wednesday, 20 July 2016, at the CTARC Clubhouse.

Please note this is a (once-of) change from the usual Monday evening meeting before the Saturday members meeting.

As announced, the Cape Town Amateur Radio Centre will hold its important Annual General Meeting for 2016 on Saturday 23 July 2016 at 14h00.

The following PDF documents have been e-mailed to those CTARC members for whom we have e-mails. For your convenience they are also available here on the CTARC Blogspot. 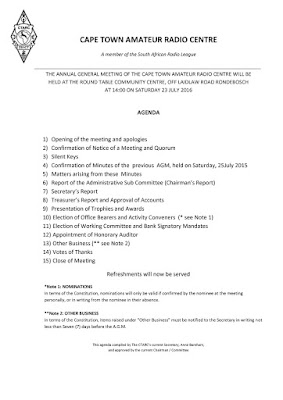 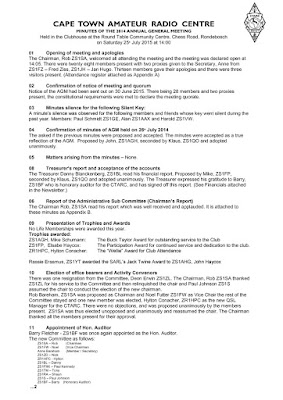 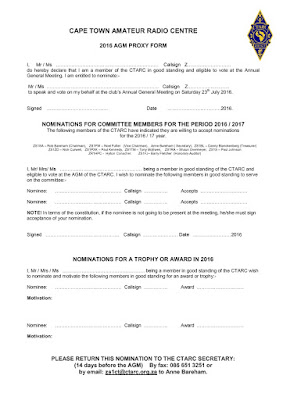 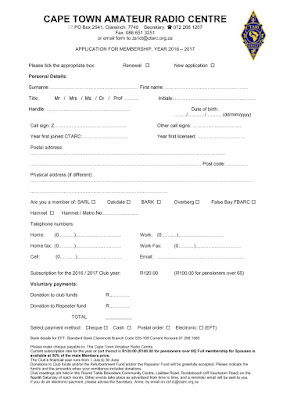 The Cape Town Amateur Radio Centre will hold its Annual General Meeting on Saturday 23rd July 2016, at 14h00, at the CTARC clubhouse [here] in Rondebosch. All CTARC members are encouraged to attend.

At this important meeting, the chairman will deliver his report, followed by the treasurer delivering his report. The various awards and trophies will be handed out to their recipients and and the new office bearers will be elected.

Afterwards there will be an opportunity for members to socialise over refreshments.

The July 2016 edition of the Cape Town Amateur Radio Centre's bi-monthly newsletter "Ragchew" has been published. Grateful thanks to club secretary Anne for yet another fine edition!

You can download the July Newsletter as a PDF directly from [here]. 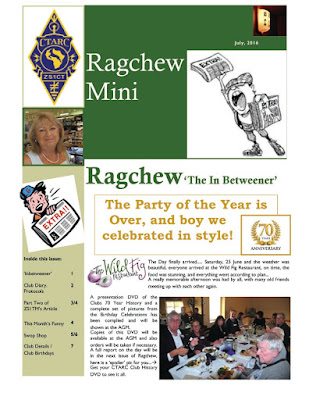