There will be a meeting for members of the CTARC committee, at 19h00 on Monday, 20 February 2017, at the CTARC Clubhouse.

On Saturday 28 January 2017, the Cape Town Amateur Radio Centre held its first monthly meeting of the year, which was so well attended we had to hand out more chairs to people arriving at the back of the clubhouse lecture room!

We started with our club's chairman Rob / ZS1SA, requesting a moment of silence in memory of Owen Penberthy (ZS1JN) / SK, a former committee member of our club. Owen passed away on 29 December 2016.

On a happier note, Rob then handed over the CTARC Club Participation Award Trophy to Barry / ZS1FJ, who had been unable to receive it at our July 2016 AGM because he was away in Singapore at the time.

Rob also gave a report-back on the proceedings of the recent Committee Meeting held on Monday 23 January.

Then for the main event of the afternoon. We were introduced to Harald / OZ8X, an experienced DXer from Denmark who is on holiday in Cape Town. Over his long maritime career, initially as a ship's Radio Officer, then as a Ships Master on a variety of ocean-going vessels, and now as a retired person, Harald has achieved the DXCC Top Honours award, and has visited many, many DX-entities over the years.

However, the reason he attended our meeting was to show us the construction and erection of his remarkable, massive telescopic rotatable antenna tower,.This huge piece of high-class radio antenna hardware, made by the Luso company of Tokyo Japan, had previously been on display at the German radio amateur fair held annually at Friederichshaven. Owing to their size, only a few of these giant towers have been installed in Europe. This one is 36m in height when fully extended. It is free-standing (i.e. no guy wires) yet is rated to withstand high winds.

To give you an idea of the scale of this monster mast, where most hams are content to dig out a cubic metre of ground in which to pour the concrete base, Harald's antenna required a 3m x 3m x 2.7m square hole to be dug with a professional excavator before many tons of concrete could be poured into the ferrocement cage that fitted snugly in! That concrete base had to harden for a further two months before work on the above-ground portions could begin. In addition, much time and effort had to be spent to get the environmental impact assessments and approvals done (beforehand) for so large a construction project.

Three very competent young Japanese ladies from the Luso company arrived to oversee the construction process (they do this year-round, traveling internationally to various antenna sites to oversee construction). Additionally, a couple who work for Optibeam antennas came out to assemble, position and fine-tune the beam antennas that were to be hoisted (by a massive crane) up to their final locations high on the mast. The big 80 beam (positioned highest on the tower) is so large that, on the way up, it tangled with the windbreak trees on the property's perimeter!

The whole process took about two years to finally complete, as well as a serious amount of the necessary folding stuff. However, the results, says Harald, are very well worth it. In addition to the high-up rotatable beam antennas for all HF bands, as well as several QRO linear amplifiers, his QTH is in a rural, radio-quiet environment. A winning combination for getting through the DX pile-ups. We were all duly impressed, to say the very least!

At the end of the talk (including a slide show and some videos), Rob presented Harald with an embroidered cap from the CTARC, to much applause. Thanks to Harald for his talk, and to all who attended the meeting.

Some of the images below are hand-help photographs taken directly of  OZ8X's slide show projected on the clubhouse wall, so they may appear a bit fuzzy or distorted in some cases.

The January 2017 edition of the Cape Town Amateur Radio Centre's bi-monthly newsletter "Ragchew" is now published. Grateful thanks once again to Anne for another fine edition! 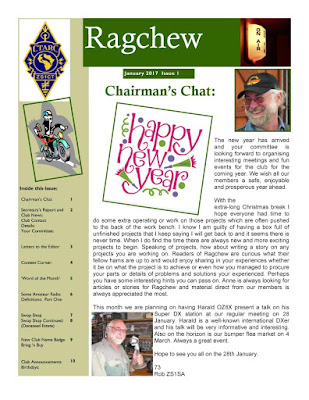 The first monthly meeting of 2017 for the Cape Town Amateur Radio Centre will take place (as per usual) on the fourth Saturday of the month, which will be 14h00 on Saturday 28 January 2017.
The venue will be the CTARC Clubhouse. Details of how to get there are [here].

At the meeting, Harald Kjøde / OZ8X, an experienced DXer from Denmark who is visiting
Cape Town, will share his insights and experiences of Amateur Radio with us.

Further details of the meeting will be published in Ragchew, on this blog and on the Sunday Morning Bulletins on the 145.750 Mhz repeater at 08h30.

We look forward to seeing you at the meeting! 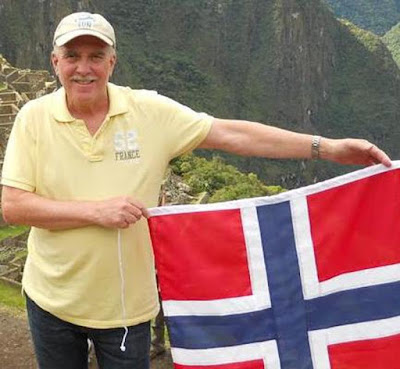 There will be a meeting for members of the CTARC committee, at 19h00 on Monday, 23 January 2017, at the CTARC Clubhouse.