Here are the photos of Deon ZR1DE's talk at the CTARC on 26 May 2018. We will try and get Deon's Powerpoint slides later, which are far better than my photos of slides projected on a wall!
The text report-back is [here].

Here is the report on the May 2018 meeting of the Cape Town Amateur Radio Centre.

The meeting was held, as is usually the case, on the fourth Saturday of the month at 14h00 B. This was Saturday 26 May 2018 and the meeting at our Rondebosch clubhouse was very well attended. Word had spread about the speaker and topic! Our chairman, Rob ZS1SA called the meeting to order promptly and gave us some feedback on the recent CTARC committee meeting held the previous Monday. Various matters come to hand:
Admin matters concluded, Rob introduced Deon / ZR1DE, the main speaker for the afternoon. Deon needs little introduction, as he is very well known in our community for his enthusiastic interest in Satellites, his active involvement in the Kletskous CubeSat programme at the Cape Peninsula University of Technology and in the worthy AmsatSA organisation.

Deon's well-illustrated presentation was about CubeSats in general, and the FunCube in particular. He launched his talk with a description of how satellites are sent into space by rocket, and how the item, once launched, can remain in orbit with at least a minimum necessary velocity to stay aloft. He showed a map of the main (mostly military) launching sites across the globe, and how South Africa is in a unique position to be the first to spot satellites launched westwards from the US east coast.

We were then introduced to the concepts of Equatorial and Polar orbits, and the "footprint" of satellites as they pass over a stationary observer/radio ham station below, with an available window of about 15 minutes (if the observer below is lucky enough to have a good pass). We saw a slide of the Vandenburg USAF Base from which many satellites are launched from the USA.

What isn't generally known is that CubeSats were borne out of the need to provide ballast on certain satellites for ballistic purposes, until someone had the great idea of using deployable mini-satellites instead of cubes of concrete!

Deon then introduced us to the FunCube satellite, which started off initially as a university project to provide outreach to schools in the UK to generate interest in Space technology. This 100mm square cube has sensors on its corner columns to measure various parameters such as temperature and sunlight, which is then sent by telemetry back Earthside, where an enthusiastic following of people track the satellite and turn its raw data into usable spreadsheet format.

The FunCube has a small computer to run its functions, but no hard drive would survive the launch (or cosmic radiation), so it rather loads up the BIOS and operating system via a miniscule SD card. This means if the system gets corrupted, it can be re-uploaded again.

The FunCube has antennae for the 2 metres and 70 centimetre ham bands. These are thin (but sufficiently stiff) metal tapes that are unwound to the correct length from the sides of the satellite.

Deon then gave us more insights into the data that the FunCube provides. Initially starting off as analogue measurements taken by the FunCube's sensors, these are then digitised and transmitted from the satellite back to Earth. (An ancilliary project, the FunCube Dongle SDR, has been developed to enable the teams to receive the data directly from the satellite.) This is where the project really comes alive, because the data can be tracked, decoded and analysed to provide functional information about what the satellite is sensing. It gets more involved when trends are analysed over time - daily, weekly and monthly. Deon showed us some fascinating graphs assembled over 16 weeks that show specific trends in temperatures and other parameters measured by the FunCube.

And, of course, there is the transponder, which enables radio hams to contact each other - transcontinentally at times - while the satellite is overhead. You do not need a kilowatt to work FunCube (if you try that level of QRO, the poor widget will switch itself off to prevent its receiver getting burned out!). 20 watts and a dipole antenna (or Yagi) are usually quite sufficient.

Deon concluded by answering questions from the audience, and received a good round of applause for his very interesting talk.

Thereafter we all had the chance to catch up and chat, and to buy and sell things in the monthly Swop Shop. Thanks so much to Deon for his talk, and to everyone else for attending.

The speaker for this meeting will be Deon Coetzee / ZR1DE, with a talk on the SA AMSAT radio amateur satellite projects and the FunCube SDR.

Deon's enthusiastic involvement in this field over the years is well known and he is an established authority on the subject, and it promises to be a most interesting talk indeed.

Please note that this topic / speaker replaces previous notifications for the 26 May 2018 meeting. We do apologise for any confusion that might have been caused.

Details of our forthcoming meetings are usually announced on our Sunday morning CTARC bulletins on the 145.750 MHz repeater, in our newsletter "Ragchew" and on this blogspot.

Note: This meeting has now taken place. The report-back is [here].
Posted by Cape Town Amateur Radio Centre at 12:01

There is an urgent request for assistance from Klaus / ZS1QO for fellow radio hams and club members to help him finish dismantling his radio station in Rugby in Cape Town. Klaus and his family are set to depart the QTH quite soon, and his state of health prevents him from doing this big job on his own. While his masts are now dismantled and antennas are down, there is still work to be done.

He also still has quite a large selection of amateur radio rigs, antennas and accessories for sale too. Here is an extracted list of items that appeared recently in the Highway Amateur Radio Club swops page:

PLEASE VISIT ME OR CALL FOR MORE INFORMATION AND SEND E_MAIL FOR DETAILS.

Klaus requests you contact him by direct mobile phone call, please NOT by WhatsUp nor by SMS. You can do so on: [ zero 8  three = 6 too six = six  9  six  4 ].
He may also be e-mailed at comlab at global dot co dot za 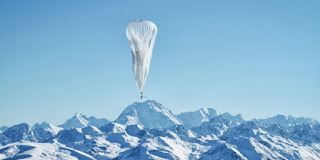 This is an experimental research and development project by formerly Google X. This project is to provide internet access to rural and remote areas. This project uses high-altitude balloons placed in the stratosphere at about 18 Km above sea level.

Two of these balloons have been spotted on an app called "FlightRadar24. (which please Google).

It might be possible to bounce VHF or UHF signals off the Mylar balloon material.

There is another balloon which is presently over southern Angola. It's registration is N183LB.

Check out Project Loon on Google and [here and here], and also FlightRadar24 [here].

Hope this is of interest.

The May 2018 edition of the Cape Town Amateur Radio Centre's bi-monthly newsletter "Ragchew" is now published. 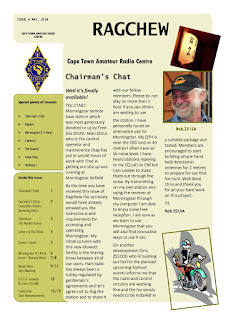 Here are some more photos of the Morningstar Remote Control Station.
Grateful thanks to Dennis / ZS1AU for providing these. 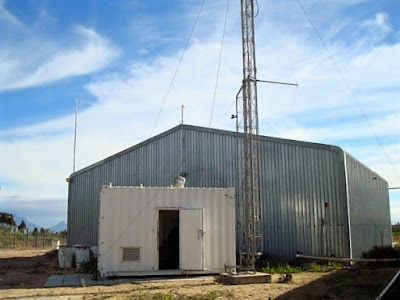 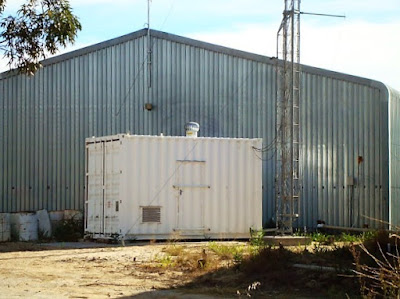 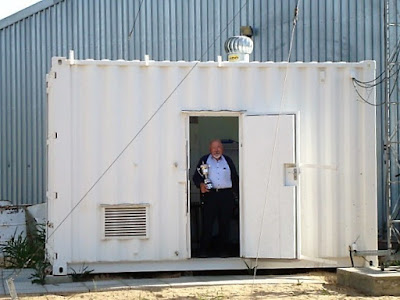