You will have heard the sad news of the passing of ZS1BW in the Sunday CTARC bulletin of 24 December 2017. Here follows a brief eulogy that was broadcast on that bulletin:

On Friday 22 December, the key of Bernie Crockford / ZS1BW or “Boere Wors”, as he will be affectionately remembered, went silent. He was 88 years old.

Bernie was born on the channel island of Guernsey.

He saw service in the Royal Navy, and came out to South Africa in 1947 on the HMS Vanguard, which was considered then to be the most advanced battleship in the naval fleet.

Also on board that ship were members of the Royal Family, including then Princess Elizabeth, on their post-war tour of South Africa.

Bernie liked our country so much that he returned here. He married Sylvia, who survives him, and in time became the patriarch of a large family that includes children, grand children and even great grand children who will all, like us, remember him with fondness.

Bernie worked for Gallo South Africa as a recording engineer, in a studio in Oranjezicht. Ted Baker (then ZS1RA) was the managing director. Bernie also worked later on for CNA and was the manager of the Wynberg branch when he retired.

His QTH was in Ferness Rd in Ottery for a number of years, where he kept a significant radio station with a TH6 beam antenna. It was from this QTH that he broke the South African record for DX contacts in the two metre band when he worked a station on a ship up in Luanda harbour on 144 MHz, taking advantage of unusual coastal ducting conditions. As far as I have been able to ascertain, that record still stands unbroken.

Bernie was an honorary life member of both the SARL and of the CTARC.  He served as CTARC Chairman and on the CTARC committee. He edited the CTARC newsletter, "Ragchew" for years and also diligently put together the "Acorn Times" newsletter of the Oakdale Klub-Amateur Radio. He also hosted the ZS1OAK Natter Net for some years. He also used to relay the transmission of these CTARC Sunday morning bulletins on the 80 metre band for a while.

Later, Bernie and Sylvia moved up to Langeberg Ridge, where he was not too far from Dave Perry / ZS1SG.

Bernie was one of the great characters of our hobby, broad in compassion, wise in his insights and not unafraid to puncture some over-inflated sacred cows where necessary. We shall certainly miss him.


Bernie was a great radio amateur, a GIANT amongst GIANTS and did so much for all in this ZS1 area.

He served as Chairman and Committee Member of the Cape Town branch / CTARC & Oakdale Club  and was the editor of Ragchew (for CTARC) and the Acorn Times (for Oakdale Club).

Bernie was one of a kind and his XYL Sylvia stood by him in all his ham activities.

He was a popular and likeable human being and we will miss him for his contribution to amateur radio and his friendship over many decades.

My deepest sympathy to Sylvia and his large family.

He was 3 months younger than me and his passing was still unexpected.

Bernie had many interesting ideas and was a very busy and hard-working person.

May he rest in peace.

A private family memorial service for Bernie was held on 5th January 2018.

Grateful thanks to Dennis / ZS1AU, Mike / ZS1FP and and Nick / ZS1ZD for the photographs and articles below of Bernie. 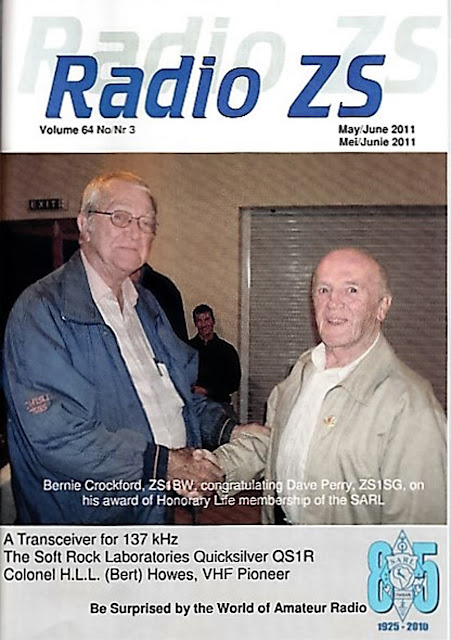